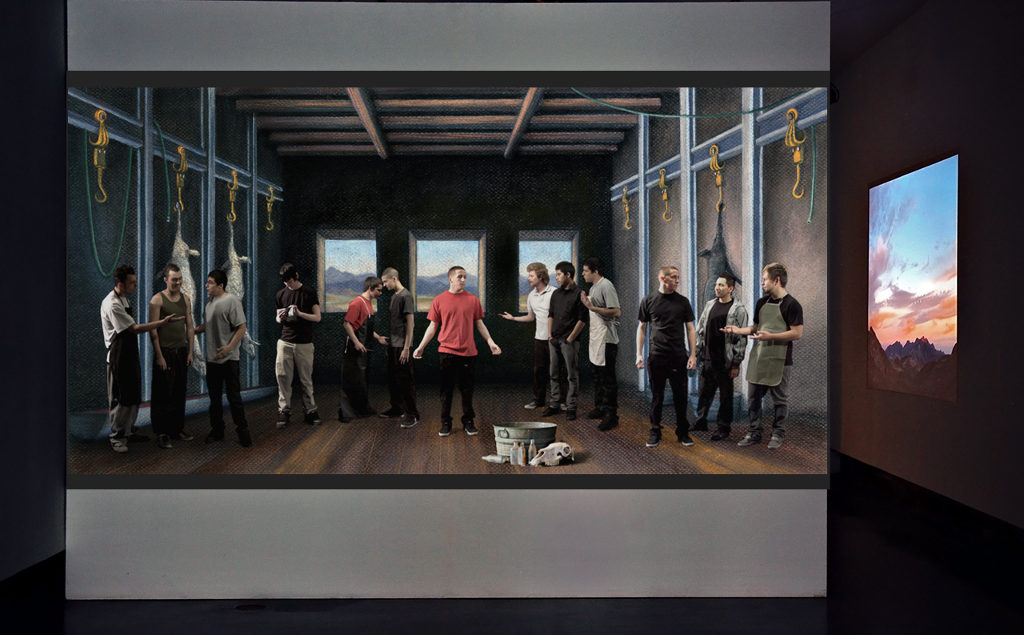 Even though Joyce Lee paints with Renaissance masters in mind and exhibits her work in art galleries, she transcends chilly white walls with cinematic presentations that she calls “projection paintings.” Lee evokes places at once distant and near: faraway cities, landscapes, and still-life settings rendered with a sensuous, painterly touch—yet brought to life in the gallery primarily by light projected onto walls in darkened spaces, suggestive of ethereal imagination. At Lee’s shows, the characters in her projection paintings playfully mimic the inquisitive viewers in the gallery space. These characters seem to live eternally in rich re-imaginings of settings from iconic paintings, but they wear contemporary garb and engage in subtle, silent interactions. In paintings from the canon of art history—Vermeer, Caravaggio, and da Vinci, to name just a few—Lee searches for dramatic spaces pierced by lit characters or objects, directing the viewer’s eye toward a moment of high drama in a narrative, or at least a suggested moment of transcendence from prosaic life: an epiphany. At times that light originates in the sun; others, gilded from within, an almost religious source of illumination.

The societies for which the old masters painted had common stories, recited from the Bible; today our kaleidoscopic culture has no common narrative, the moment of illumination refracted in a whorl of dizzying stories. Many of her contemporaries flee from fragmented narratives into the welcome, open spaces of abstract art, but Lee embraces her Dutch and Italian art historical sources. She remains steadfast in her fascination with the suggestive mystery of light beaming through shadows—that artful moment of illumination mastered by the painters she explores in each work. By evoking timeless imagery that has moved beyond museums and into the popular imagination, Lee draws upon a common visual heritage, where otherwise she might find inscrutable discord. She invites all types of viewers to engage with her work, now untethered from the constraints of an ossified narrative. At the same time, the repetitive motion in her projection paintings lulls the viewer into slowing down while viewing the painting—a pause from the frenetic distractions of daily life.

At the Hamiltonian Gallery in Washington, DC, Lee unveils “At Last,” a new work created during an artist residency at Goldwell Open Air Museum near Rhyolite, a Nevada ghost town in the Armagossa Desert and Death Valley. For the long-ago miners of Rhyolite, life here was bitter and withering, the sun beating on the red-stained hardscrabble land, the fabled gold in its veins proving elusive. The word armagossa actually means bitter: Dusty miners and their trusted donkeys, known as burros, sought riches with sticks of dynamite before abandoning the town nearly a century ago; today, the nearby town of Beatty suffers from a lack of economic and educational opportunity.

With her “projection paintings,” Lee mines a space with many stimuli. In the darkened gallery softened by moments of illumination, a corridor greets the viewer upon entering. One side shows a sequential series of pastel paintings, a dramatically lit still-life turning into a modern-day mosaic of pixels on velvety black. The other side mirrors the pastel paintings: glossy photographs of the same still life. These works lead to a still-life painting spotlighted by a digital projector of pixel-gridded light. The still life appears like a Dutch vanitas painting, a meditation on fleeting life through an artful arrangement of allegorical objects. A metal bin, a burro skull, empty bottles before an ultramarine blue drapery—Lee considers this painting “the reveal.” In real life, the pastel blue drapery provides a blue-screen for masking and compositing on the computer. This painting appears again in a cinematic projection of light, on a wall that overlooks the gallery.

The projection painting suggests Leonardo da Vinci’s The Last Supper, that eroded mural from a Milan refectory painted above a doorway, which reveals the apostles’ cacophony of emotional reactions to Jesus pronouncing imminent betrayal. Now this scene becomes a slaughterhouse festooned with slaughtered sheep and populated by quizzical characters in contemporary garb, some wearing butcher’s smocks. Lee collaborated with a resident photographer to film young men in the nearby town of Beatty, casting them in the role of Jesus, Judas, and his apostles. In this way, Lee intermingles the rarefied, timeless realm of fine art with daily life. No matter the prosaic details of life, this painterly space suggests that each person embodies a story, and each person is a work of art.

Around the corner, behind this main projection painting, the viewer discovers two more digital light projections, one a time-lapse sunrise in the Nevada desert, depicting a white-stone sculpture by Belgian artist Charles Albert Szukalski, a ghostly congregation of figures inspired by the last supper and the desert setting—so reminiscent of a Biblical world—blue shadows sweeping and pulling over the scene like a veil; on the opposite wall, a time-lapse sunset, the endless meandering red canyons of the desert allowing viewers to wonder and wander, to lose themselves. While touring this landscape, Lee learned how the layers of rock tell stories: a bleached streak near a cliff’s peak turns out to be a petrified coral reef, from a prehistoric time when a sea filled Death Valley. Even the shifting light of day can slowly transform a space, like gold and blue haystacks painted by Monet in different qualities of light. Once we slow down and explore, we discover how the world around us conceals untold richness and stories.

In her book The Kinetic Eye, New York Times art critic Grace Glueck notes, “The idea of environmental art—that of a ‘surround’ providing us with numerous sensory stimuli—is not all that new. The concept was well expressed, it could be argued, in the great cathedrals of the Middle Ages—actual mixed-media works that appealed to the senses via lighting effects, music, art, tactile, spatial, and olfactory stimuli.” Movie theaters are the cathedrals of today: people gather in mass to suspend disbelief and consume narratives. In a gallery space, Joyce Lee evokes this ambience, at once religious and secular. Does she consider the miner’s long-ago quest for gold the religion of today, with its attendant overtones of betrayal? Is she considering aspects of rebirth by meditating upon a burro skull, its baleful, liquid-eyed descendants still living in the Nevada desert? Does Lee call into question how humans commune with other animals, and how we assume other animals must sacrifice for human life to flourish, from the ritualistic, personal halal and kosher practices of the Middle East, to the vast slaughterhouses of the industrialized world? Even in a setting as iconic as The Last Supper, Joyce Lee evokes an imaginative story of abundant possibility.